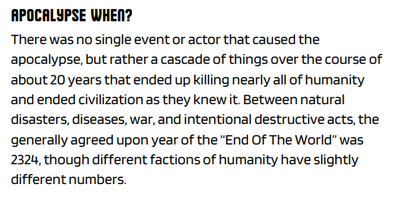 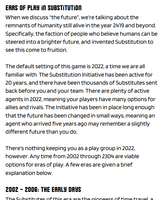 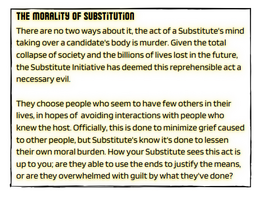 Talking with Groov about the adventure frame got me thinking about the setting of Substitution, and how I envision the timeline. So I've been working on some lore setting and lore information, including a short discussion on the morality of stealing someone's brain, and how you can play in an era of cyberpunks and mind uploads. Nothing is ready to be released just yet, but I've provided screenshots of some VERY EARLY work in progress paragraphs.

A note about the timeline: one of the new established elements of Substitution is that 2002 is the earliest any time traveler was ever sent back. This is a new bit of setting lore that I hadn't provided to Groov (because I hadn't written it yet) when he made the Snapshots, so the "Golden Eyes" adventure frame states that it takes place in the 1960s. This can easily be remedied to be in the modern day, or for some extra spice, set it in the 2160s. I apologize for the confusion, but Golden Eyes is an amazing antagonist, and I wanna make sure he sees some action.

In the future, the world ended. You've come back to save it. A Breathless game.