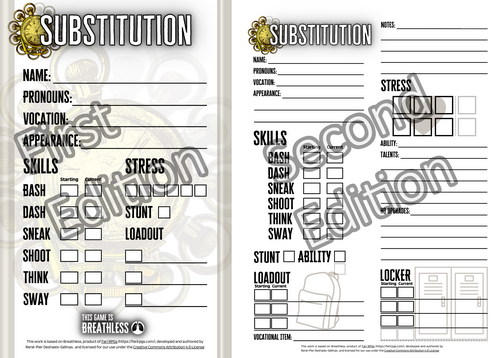 Let's get to the meat of the update!

Then, as I'm learning is incredibly common among indie designers, I got distracted by other projects. One new project became three became five, and while I was always making notes about upcoming Substitution changes, I couldn't finish one thing before moving on to the next.

One night, inspiration struck, and I stayed up until the wee hours of the morning typing away. Out of nowhere, I made significant progress, and decided that this was going to be something of a second edition for Substitution, taking the original single page (and character sheet) and expanding it to four. Packed with new mechanics and a detailed lore section, this is the Substitution that I had in mind all those months ago, and I'm super excited to be presenting it now!

In the future, the world ended. You've come back to save it. A Breathless game.