With more than 2,000 downloads, As the Crow Flies is Chubby Crow Games' most downloaded game to date!

There used to be humans here, but they all left. That’s what your mama told you, and what her mama told her. The Earth Mother has begun to retake the land and bring magic back to it. Green grass and vines cover the cities the humans left behind.

You are a crow.

Take flight from your nest and explore.

As the Crow Flies is an exploration game built on the Carta system that encourages you to put yourself into the feathers of a young crow leaving the nest for the first time. Befriend other animals, search for food, find interesting trinkets, and eventually settle down to create a nest of your own.

Tales from the Heartland

Set during the Trade Wars, Minted in Blood puts players in the middle of the conflict. Play as scrappy heroes fighting against the plutocratic PTC. (Currently in development!)

Set 100 years after the Trade Wars, play farmers, fishers, miners, and other workers using abandoned battlefield mechs to help with their daily lives. Complete jobs for your town, calm wayward spirits, and even fall in love in the pastoral post-war Mectors.

This work is based on the Carta system (found at https://peachgardengames.itch.io/carta-srd), from Cat McDonald and Peach Garden Games, and licensed for use under the Creative Commons Attribution 3.0 Unported license (http://creativecommons.org/licenses/by/3.0/).

The Carta logo is © Cat McDonald, and is used with permission.

In order to download this solo journaling game you must purchase it at or above the minimum price of $2.50 USD. You will get access to the following files:

Support this solo journaling game at or above a special price point to receive something exclusive.

Is money a hardship? Are you a member of a marginalized community? Do you just frankly not want to pay?

For every purchase of the game or 5-star rating, I will add one community copy.

For each purchase of $20 or more, I will add 10 community copies to the pool! And I'll add your name to the Acknowledgments page as a Crow Friend.

A soft game that leaves me feeling peaceful after playing it.

Oh my gosh thank you! I haven't really had any feedback from people playing it (other than the review), so this means the world to me. 🥰

As the Crow Flies is a game where you play as a young crow leaving their nest for the first time to explore the world. You get to communicate with other animals, explore manmade ruins, and encounter magical things.

Love this low-stakes take on the Carta system! A really nice roleplaying exercise to shift our perspective from the human-centric.

Thank you! I really wanted this to be a warm and wholesome experience, while still maintaining some of the "game" elements that make failure possible. I also wanted failure to be a positive ending in its own right. 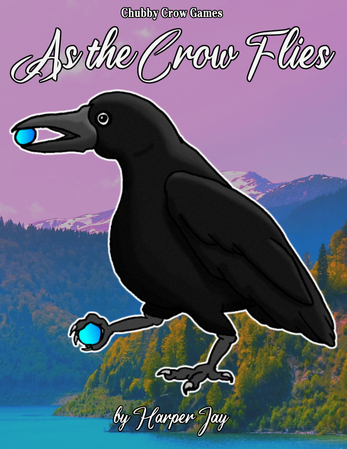 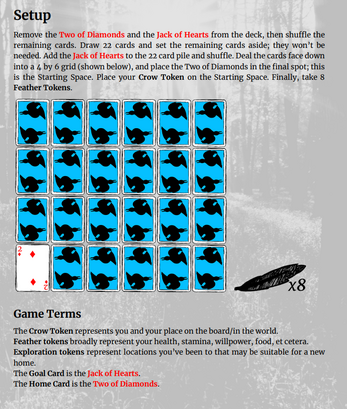