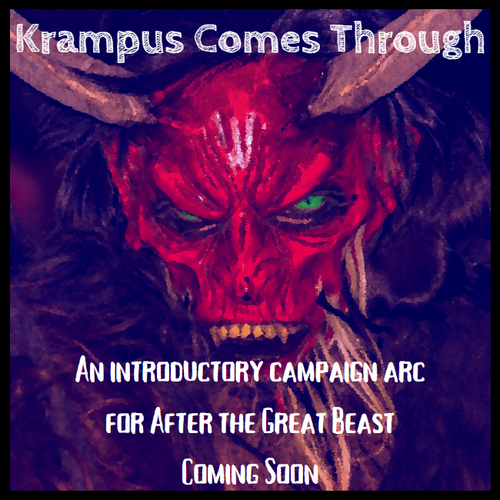 Squonkle Village is surrounded by a teeming wilderness, and for the most part, the village lives in harmony with the nature around it. While the Corruption taints some beasts and drives them to chaos and destruction, that Corruption is unnatural, and its origins are shrouded in mystery.

Krampus is a special creature, elevated above the bestial intelligence of the tainted beasts that normally threaten the village. An entity from another realm, Krampus has appeared with a menacing mission; to kidnap the hunters of the village, twisting them into his elves and bringing them back home. However, Squonkle Village is well defended, and Krampus has been unable to make his way past the gates. To get past these defenses, he has begun capturing tainted beasts, throwing them against the village walls in hopes that they would fall.

The Assembly of Hunters has to make a decision: do they wait out Krampus's attacks, hoping the walls hold up?; or do they go out into the wild to find Krampus, taking the fight to him?

"Krampus Comes Through" is an introductory campaign arc for After the Great Beast that will be included in the upcoming expanded version of the book. It introduces the setting to an intentional, malicious threat. Tainted creatures are generally chaotic, with no plan, driven to their actions by the unnatural Corruption. Krampus is gathering these creatures together under his vision, and aiming them at a target to funnel their chaos into a single goal; to kidnap the  hunters themselves! He seeks to use the Corruption to taint the hunters and change them into his elves, then put them into his service.

While the campaign certainly does have a distinctly wintery theme, it can take place at any time of year. Krampus isn't from this world. He has somehow lost his way and become stuck here. The actions of the Assembly of Hunters will determine what happens next.

Get After the Great Beast

After the Great Beast

The great beasts threaten your village. Gather your weapon and fight back. A Breathless game.